When it comes to customers, utilities traditionally have had one focus: not to poke the proverbial bear; don’t ever call the customer because doing so could make them aware they have the power to switch power suppliers. The rationale? Simple: Every kilowatt-hour used by customers brings revenue. What’s more, customers that never switch suppliers typically get the most expensive tariffs. Customers who know suppliers can be switched have spearheaded utilities to create long-term lock-ins. This has led many utilities to offer products and services meant to incentivise customer loyalty. Smart homes, solar PVs, and batteries have all been put on the menu.

These strategies have been costly and their success less than stellar.

The truth is: utilities have entered a death spiral. It’s only a matter of time before decentralisation, decarbonisation, and digitalisation kill their business altogether. It’s time to rethink the game plan.

Management of Local Energy Communities: The Future of the Utility

That sounds strange at first, but what if instead of attempting to lock in customers, utilities helped them set up their own local energy communities where members can share green energy? Undertaking this challenge would mean utilities could carve a new role for themselves as facilitators for these local energy communities. This way, customers could achieve energy independence by going green while utilities could simultaneously change their competitive position in the market and become the community’s service manager in the background.

What Would be the Next Steps?

However, to do so, utilities would need to be willing to restructure their entire business model.

The most obvious preliminary step would be for them to convince their customers to embrace independence. This step is the most hazardous since it entails the risk of awakening customers to better deals offered by other utility companies. As precarious as this initial moment may be, it is the only way utilities can hope to trigger energy communities able to save them from their current demise.

Marketing-wise, this transition would mean utilities should no longer present themselves as purveyors of electricity. Instead, they ought to meld into energy communities’ backgrounds. They can do this by rebranding themselves as facilitators of energy independence. Once the brand is established, utilities should tap into customers’ need for inclusion: your neighbours are already in our local energy community, wouldn’t it be a shame to be left out?

What role would utilities play as facilitators of energy communities?

What’s in it for end-customers?

Positive returns associated with energy communities exist, but they continue to be untapped by utilities. In order to be the first to reap their benefits, at least one company needs to be willing to undertake the challenge and create energy communities of its own.

What would a business case for communities look like? Let’s imagine a large European utility was the first to create these…

Our utility makes a gross margin of approximately €85 per customer per year, so €850 per decade. Assuming our utility undertook the role of energy community facilitator, this number could greatly increase: 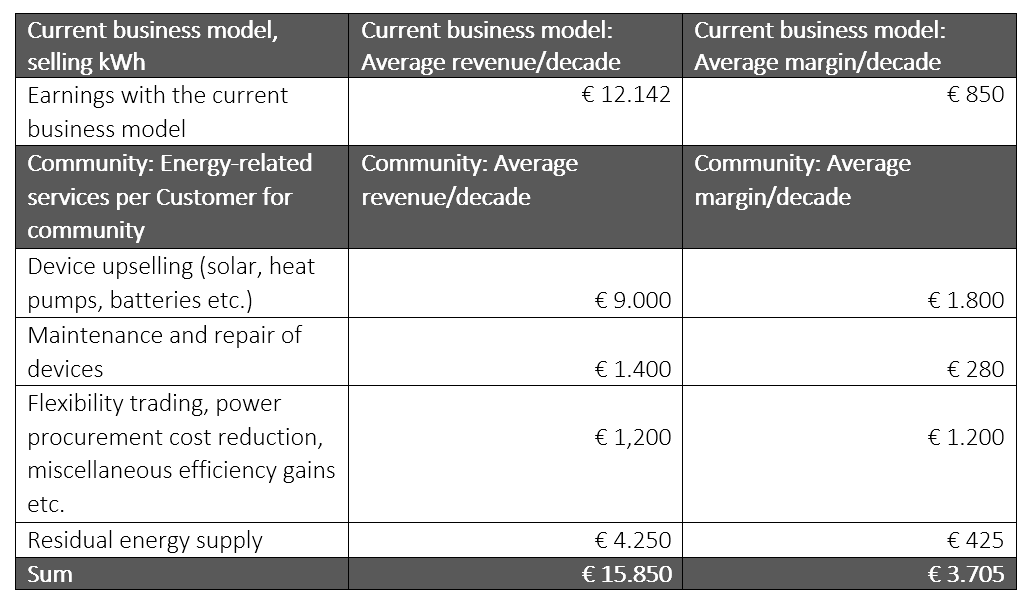 Our utility’s customer lifetime value over ten years would go from €850 to €3,705. Considering this number multiplied by the utility’s 30million customers it’s clear the company only stands to gain from changing its business model. Even if only a certain percentage of the 30million customers would pick up additional services, the rest would still remain at least at the same level of customer lifetime value.

The question is: will this large utility take action or will it let competitors jump on the opportunity first?

Is it Really Worth the Trouble?

So, is it worth the trouble? Large utilities are still bringing in profits, after all. Why uproot entire operations and business models for localised energy communities?

The short answer is: yes, it is worth the trouble. Most researchers and industry insiders agree that the spread of decentralised renewable energy is exceeding utilities’ ability to adapt both technologically and financially. Even huge industry players are reporting continued declines in results; declines were driven by changes in the industry. The global energy transition has created a radical state of affairs requiring radical solutions. Offering incentives as banal as smart homes, solar PVs, and batteries has proven to be ineffective. Utilities likely to survive the ongoing transition are those that will adopt revolutionary solutions. Utilities-sponsored energy communities are one of them. Disruption is possible in the energy industry. And if you don’t disrupt your business, someone else will.

Find out more about GreenCom’s Local Energy Communities solution or get in contact.